A Houston-based women’s jewelry and accessories retailer is spreading its footprint beyond the U.S., with two international locations open and planning underway for two others.

Within the past few weeks, two Charming Charlie stores have opened in Dubai, United Arab Emirates — 8,000 miles away from headquarters.

One store is at City Centre Mirdif and the second is at Ibn Battuta Mall in Dubai. The stores are Charming Charlie’s first locations outside of North America.

The move has been in the works for about three years said Charlie Chanaratsopon, founder and CEO of the women’s jewelry and accessories retailer founded in 2004.

“What we wanted to do, first and foremost, was to have a market that would help build the brand,” Charlie Chanaratsopon said.

Charming Charlie teamed up with Apparel Group, an operating firm that oversees daily operations at the Middle East locations as it does with 1,000 other stores of different brands.

Accessory offerings differ a little for the Dubai store and have been tailored for locals, though the shopping experience is the same there as in any of the more than 350 Charming Charlie locations across the U.S. and Canada.

What made Dubai attractive was that it is a large market that can support continued growth, Chanaratsopon said. Business has been “gangbusters” since opening day, he added. 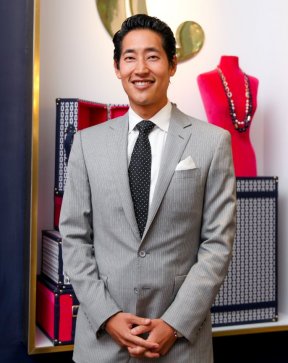 Charming Charlie has been on a growth spurt, opening about 150 of its stores within the past three years and averaging about 55 new locations per year.

A new store opened in June along Fifth Avenue in New York City.

Additional international locations are in the works. Charlie Chanaratsopon said a location in the Philippines could open this fall and a Mexico location in spring.

Charlie Chanaratsopon founder and CEO of the accessory store Charming Charlie, which Forbes magazine said made $550 million in sales in 2015. Mr. Chanaratsopon was included in Forbes’s list of “America’s Richest Entrepreneurs under 40” that year.