Charlie Chanaratsopon, the force behind the Houston-based accessories chain Charming Charlie, lives in a modern castle in the sky that mixes business and pleasure

From his high-rise condo, Charlie Chanaratsopon can see the world.

At least, it seems that way.

His 19th-floor apartment at 2727 Kirby has panoramic view of the city stretching from downtown to the Galleria then rounding out with the Upper Kirby area, including West Ave and the Med Center in the distance.

The view is spectacular at night, as city lights intensify the bustle of cars below. Two balconies with grass like floors on each side of the condo are perfect perches to watch the sun rise and set.

On many mornings, Chanaratsopon, the CEO of the fast-growing, Houston-based accessories chain Charming Charlie, wraps up in his favorite oversize gray robe and sits at an 18-foot dining table with his laptop and a cup of green tea. Then he starts sorting through emails, and progresses quickly to other business.

Given that Chanaratsopon started Charming Charlie in 2004 with just one shop on Harwin Drive and has expanded to more than 200 stores nationwide, his home befits his busy lifestyle and need for functionality.

The 5,000-square-foot apartment, which took six months to design, is pristine, yet warm. There’s a sleek, coziness to every room, and each piece of modern furniture has its place. And everything from the lighting and blinds to music and TVs can be operated at the touch of his iPad and iPhone.

“I love technology. I work from everywhere, so my house is wired like my office. I can conduct my business just as effectively from my home as I do from my office,” he said.

In creating his living space, Chanaratsopon turned to longtime friend and interior designer Mauricio Nava, who handled the décor of the Charming Charlie headquarters off Harwin. The two men were roommates in 2007, and play tennis and ping-pong together.

“Charlie knows what he likes and doesn’t like. He wanted it to be modern, but functional and practical. He was adamant about that,” Nava said.

The dining table, which is made from a single tree of Munggur, an Indonesian hard wood, and special ordered from Cantoni, has a complicated history.

Because of building stipulations the table could not be hoisted into the condo by crane, so it was cut in half by a carpenter at Cantoni, then transported and installed by a dozen workers who meticulously re-assembled the table with steel beams to support its weight in the middle. Installation took two days, and more time still to slip a 22 feet by 12 feet rug underneath.

Situated in front of a north-facing glass wall, the table seats about 14-20 people in Philippe Starck Louis Ghost chairs, and offers an unobstructed view of the city. Chanaratsopon entertains dinner guests here, and also conducts corporate meetings, which are often held in the apartment.

Nearby, a 5-foot-tall wood horse from Houston’s Kuhl-Linscomb adds a hint of whimsy — and symbolism. Chanaratsopon, 34, was born during the year of the horse in Chinese astrology.

“I’m not the creative person,” Chanaratsopon said of decorating. “I’ll tell you what I like, but I like to approve all of the major pieces. And it has to be functional.”

Chanaratsopon’s approach to his business is also focused on function. He has quickly grown the Charming Charlie brand, staking out major real estate in prime locations around the country. He’s recently started opening stores flanked by higher-profile retailers, such as Anthropologie and J. Crew. In 2012, he launched a revised brand identity effort, shooting a hip ad campaign with celebrity photographer Terry Richardson, whose other new projects include a documentary with Lady Gaga. 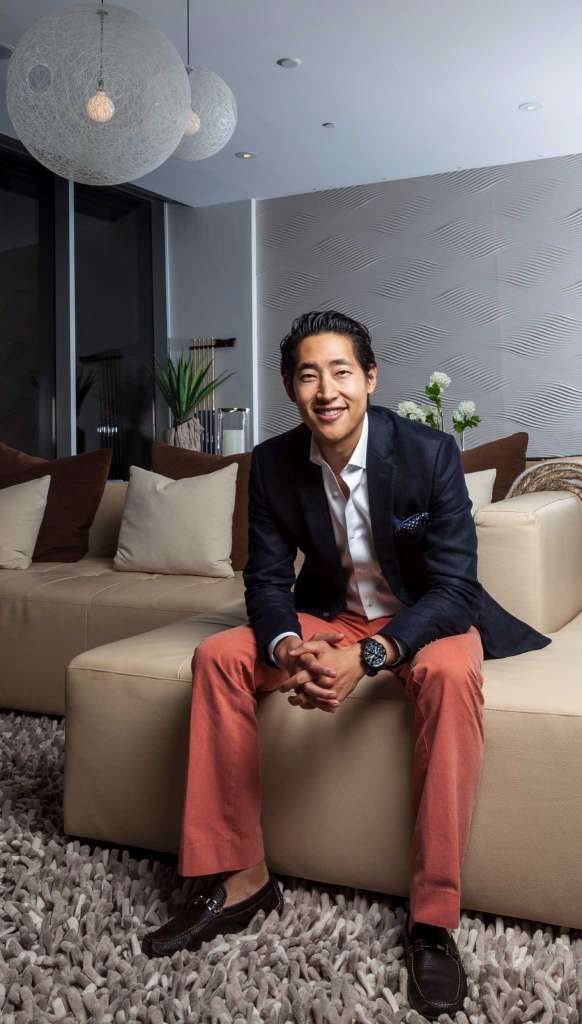 A proud Houston native and graduate of Columbia University’s business school in New York, Charlie Chanaratsopon is constantly traveling to stores, directing an empire with 5,000 employees. Ultimately, he said he would like to have 800 stores nationally and go global, à la Spanish retailer Zara.

“We will set the trend of how people accessorize in the United States, and it’s not coming from New York. It’s coming from right here in Houston.”

Chanaratsopon’s allegiance to Houston is reflected in his home. He picked the high-rise location because of its close proximity to pedestrian-friendly areas, such as West Ave, and for the city vistas. Penthouse aside, the condo is one of the largest in the building, and has its own private elevator access.

The living area includes a pool table and a large, two-sided, earth-hued leather sectional with pull-out console tables and bench seating; one side faces an adjacent bar area while the other has a Kirby street view. The plush, nubby rug is from High Fashion Home. And a 70-inch TV is hidden by a retractable customized artwork to complement photographs by Peter Leik, an Australian landscape photographer, which are displayed throughout the abode.

A wall separates the bar and kitchen area to provide a more private setting for entertaining.

“The entire apartment is designed to host 100 people comfortably without being so tight they knock things over,” Nava said. “Typically, you want the kitchen to be the heartbeat of the home, but, in this case, we wanted the bar to cater to entertaining and meetings. Charlie is very practical and value conscious. He always wants to know the value of something and how to get the most out the space. He’s not frivolous.”

In the master bedroom, the entire south-facing wall is glass with a view toward the Med Center. Other details include a metal Restoration Hardware desk resembling an airplane wing and a 55-inch TV suspended from the ceiling that can be rotated toward the adjacent balcony or desk without blocking the cityscape.

Appropriately for a tastemaker such as Chanaratsopon, the apartment has ample closet space, with one in each of the three bedrooms ranging from 300 to 450 square feet. His own wardrobe is elegantly practical with Cartier watches and classic pieces from J. Crew.

But the modern master bath, with its brown marble accents, is most impressive. The massive shower can hold eight people comfortably, and there’s also a TV concealed by a bathroom mirror and a towel warmer.

One of two guest bedrooms belongs to Chanaratsopon’s 8-year-old daughter Taylor, who lives in Los Angeles with her mother and who inspired the Charlie Girl accessories line that is currently sold in Charming Charlie stores. (He also has a house in the Bel Air area of L.A, and visits often.)

Jet-setting Charlie Chanaratsopon is intense about business, according to girlfriend Madelyn Fitzpatrick. But he also finds time to decompress at home with an early-morning swim in the building’s infinity pool, or by watching HBO’s “Game of Thrones” or “anything having to do with conquering,” he said.

He also unwinds by taking in the enviable Houston view from his balconies, kitted out with functional-but-fun lounge seating that glows at night.

Ostensibly, as Chanaratsopon can see the world from his perch, so too can the world see him.

Said Nava, “You know its Charlie’s unit the way the furniture lights up.”

Charlie Chanaratsopon founder and CEO of the accessory store Charming Charlie, which Forbes magazine said made $550 million in sales in 2015. Mr. Chanaratsopon was included in Forbes’s list of “America’s Richest Entrepreneurs under 40” that year.